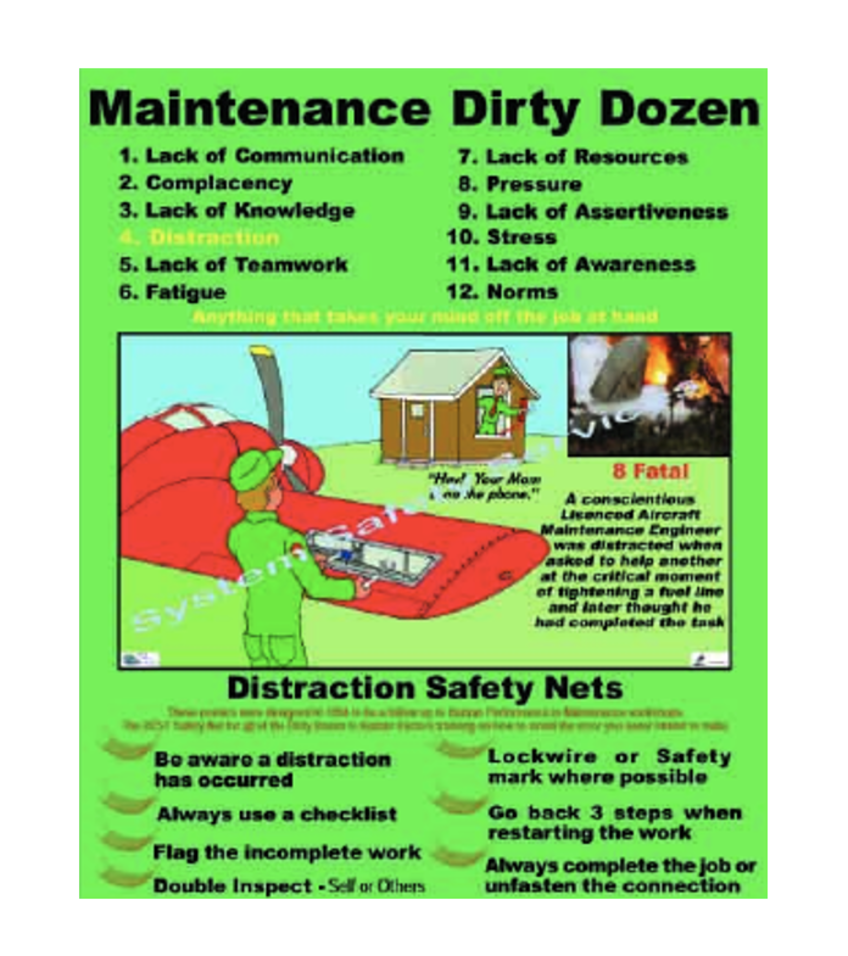 With permission from D.O.M. Director of Maintenance magazine

Distractions are an everyday occurrence in our work and in our life. It can be an unusual noise, a coffee break, a striking person of the opposite sex walking past or hundreds of other things that draw your attention away from the task at hand.

It is thought that the factor of distraction is responsible for about 15% of the known maintenance errors. So why does it occur so often? When we are working on any task, our mind has a natural tendency to think ahead. This is normal and not a bad trait until we are distracted from the task at hand. If the distraction is sufficiently long and/or strong enough we will come back to the task thinking we are farther along than we actually are. If there are no visual clues as to the actual point of completion, and we don’t have any precautions (Safety nets) to counteract the distraction, then there is a very good chance that an error will occur. The error could be a loose “B” nut or something not completed. After the error, the victim of this factor will likely, in all honesty, swear that he/she had completed the task correctly because in his mind he/she had.

The following is a case in point.

The Bell 206 was in for a regular 100 hourly inspection and the task was almost complete. One of the snags that the pilot had complained about was an annoying N1 rpm fluctuation.

Thus the AME/AMT decided to change the N1 tach generator to determine if it was the cause of the fluctuation. As he was in the process of fastening the cannon plug to the newly installed tach generator, the phone rang. He rushed to answer it as he was the only person in the hangar and it could be a customer. It wasn’t. It was his wife who was angry because he was supposed to be home getting ready for a long ago scheduled dinner date. After promising to be there shortly, he went back to the task, glanced to see everything was completed, signed the paperwork and hurried home.

The next day, while at 3,000 feet over water, with five persons on board, the pilot suddenly had the engine-out warning horn blaring in his ear and noticed his N1 indication dropping to zero. As trained, he quickly lowered the collective and made a perfect autorotation into the salt water. He experienced a difficult time in getting the rotor blades to stop before they all exited the sinking aircraft with their lifejackets. They and the upside down rapidly sinking helicopter were picked out of the water just in time by a heli-logging helicopter with a long line that conveniently connected to the sinking helicopter’s belly cargo hook. All escaped injury by clinging to the helicopter as it was lifted to shore, but the helicopter, after it’s soaking in the salt water, was almost a write off.

The cause was easy to find when the engine cowls were opened, for there on the deck lay the N1 cannon plug. The AME/AMT was absolutely sure he had tightened the plug on the tach generator but had no explanation for how it could have come loose. (You can read the complete case study by going to our website at http://www.system-safety.com/, click on Safety videos and click on ìToo Many Cooks. If you read the case study you’ll find that more than just distraction were working against him) He had been caught with the biggest distraction creator known to man, the telephone. Use of the devise while driving increases you odds of an accident by 25%. Throw in texting while driving and the odds at least double. There is a valid reason why it is illegal in many states and countries in the world. In 2014, over 2600 people died in the USA while their attention was drawn away from the task at hand by a phone.

An interesting study was conducted to illustrate the power of distraction!

1. A group of teenage students were each given a task to build something different using building blocks. (Teenagers are ideal as they still think that they know it all and have not yet entered the school of hard knocks)

2. They were each given a sheet with numbered step by step instructions on how to build the object. (Their curiosity would encourage them to wonder what it would be when completed)

3. They were called away for a coffee break before any of them had completed their project. (The distraction)

4. After coffee they were asked to write down what step they had stopped at before the coffee break. (The answers shouldn’t be too much of a surprise) EVERYONE wrote they were ONE to THREE steps further ahead than they were. Always remember: The brain can work faster than the hands and does.

A simple distraction almost caused me to leave aviation a lot of years ago while working in New Guinea. At times it haunts me to this day. On my Distraction Dirty Dozen poster it says 8 fatal below and gives a one sentence explanation for the accident. A conscious licensed Aircraft Maintenance Engineer was distracted when asked to help another at the critical moment of tightening a fuel line and later thought that he had completed the task. The result was an engine fire in flight and a fiery crash that I responded to. A child was thrown out of the aircraft at impact and lay dead near the burning wreckage. That child was about the same age as my son and when I found out why the accident occurred I realized that it could have just as easily been me who made the error. That was one of the defining points in my life and Safety took on a whole new meaning. You can and I urge you to go to our website (Address below) and read the case study of the Safety video The Price of a Mistake. The man who made the mistake is dead as I believe he never forgave himself for the deaths of his best friends. But read the case study carefully because he may have been responsible for the engine fire but the FAA and manufacturer bear the full responsibility for the deaths.

So what can we do to avoid becoming one of the 15%? You likely already have devised some personal Safety nets such as: NEVER start fastening a “B” nut or any other component without either completing the task or completely undoing it. Make it the all the way on or all the way off always. Tag the task with a bright ribbon at the last point of completion. A warning tag can be installed but they often take too long to fill out and consequently are seldom used.

Some companies have issued each person with a roll of flagging tape to tear off and tie to the part as a reminder of where you are. Torqueseal, better known in World War ll. as anti-sabotage paint, if used properly, will act as a last chance Safety net to catch the unexpected.

To be used correctly, the “B” nut must be torqued and have the Torqueseal applied before the wrench is removed. Many a “B” nut in a cluster has been accidentally tightened twice leaving one loose in its place.

An independent inspection is also an excellent last resort Safety net if done right. Do NOT, and I repeat Do Not, depend solely on a visual inspection as we often do as a loose fitting looks exactly like a tightened one and as we learned in the last issue under complacency it will look tight as that is what we expect to see. Put a wrench to it or at least your hands.

A detailed check list can also work wonders to jog the memory provided we read then sign each item one at a time. In the not so good ole days, it was common practice to just put your initials in the center of the check area and an up and down arrow from there to indicate you had completed everything on the sheet. THAT is putting a big hole in a Safety net and is illegal today. (At least in most parts of the world)

A personal Safety net which goes a long way to combating distraction is: whenever I’m distracted I will always restart the task by going back three steps. By adhering to this philosophy and the others you can prevent yourself from ever becoming a victim of distraction.